Ever since the “foresight” of Steve Jobs decreed that wired ethernet ports were obsolete and henceforth would be absent from all new Macs (on behalf of network engineers all over the world I curse you, Steve), those of us who need those jacks (because we’re responsible for getting wireless systems to work in the first place) have had to purchase add-on USB/ethernet adapters to do our jobs.

Until recently, I’ve been using this USB-2.0/Fast Ethernet dongle from Monoprice (#6150, no longer available).  It has worked fine, but it’s very awkward to use in the field with my laptop, where I literally have to use my lap, because the long, inflexible packaging continually threatens to angle downwards (or upwards, if the Mac slides off my leg) and damage the USB port of my laptop.

Since the amount of junk I have to shovel into a new router to make it work is getting larger, not smaller, I decided to find a USB3/GigE adapter, one where the end connectors were joined by a flexible cord, so as to eliminate the “big lever” effect. 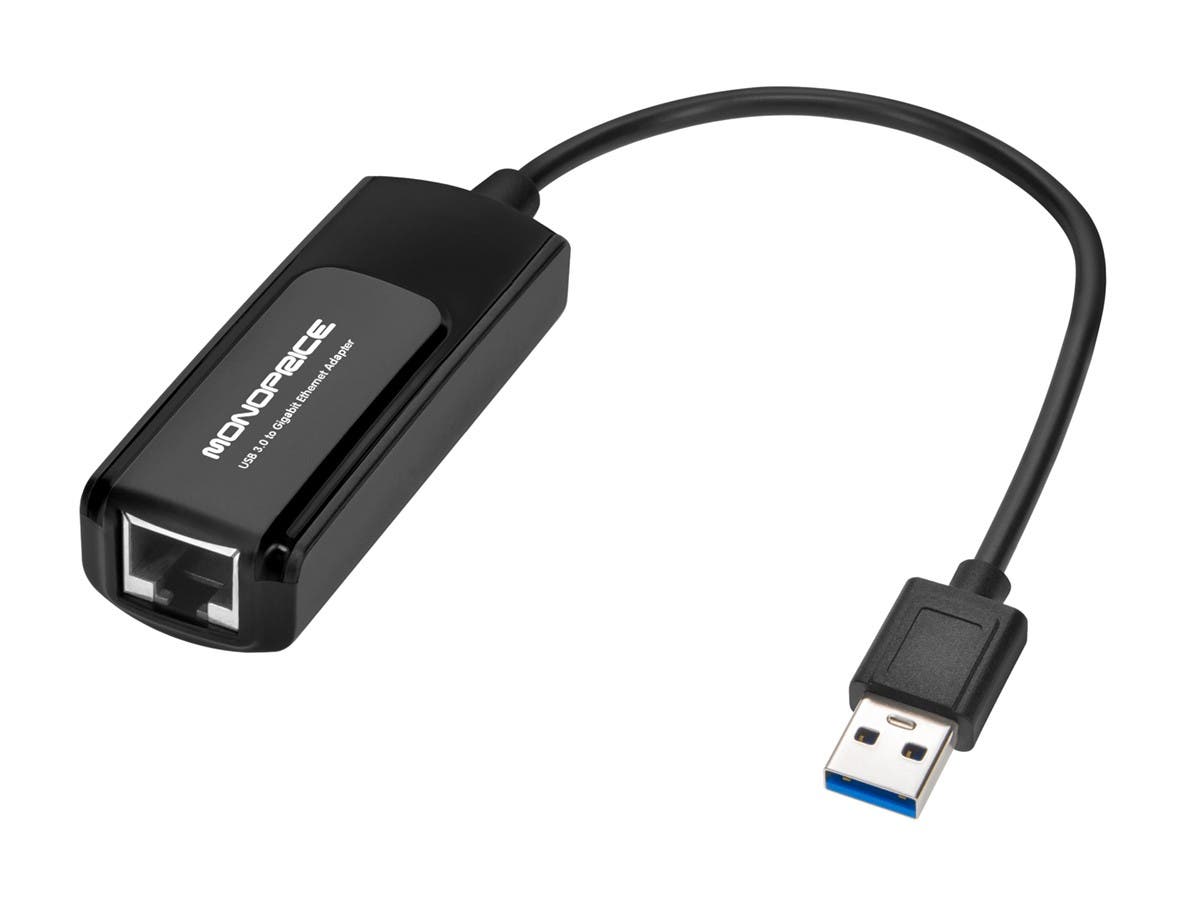 Since I’m a fan of Monoprice’s products, I tried their #11195.  Networking-wise, it worked perfectly, but there was one major flaw: either the Ethernet (RJ45) jack was a hair too shallow or its rim was shaped badly, to the result that any Ethernet cable inserted (with very few exceptions) would not lock into the jack no matter how hard you pushed it.  In the workshop, it would stay connected pretty well (it didn’t jump out or anything), but in the field it was next to useless, disconnecting all the time.  I bought two of these units at the same time, and both suffered from this defect, so it wasn’t just one bad unit.

When I finally got tired enough of picking my cables out of the dirt, I went hunting again.  I found this unit sold by OWC.  Since it looked suspiciously similar  to the Monoprice, I wrote them before buying, to ask if they were rebranding that unit, and explained why I was asking.  I got this reply:

This adapter is one that we manufacture ourselves and we have no connection to Monoprice. Newertech is actually owned by OWC and is our own in house accesories brand. Unfortunately our adapter functions like the Apple adapter and the Monoprice one in which the cable will slide in, but it does not “lock” in place like what you are wanting for it. I do not believe that this adapter will be able to fit for your needs. Please let me know if you have any other questions.

I just can’t comprehend this.

Since they were invented in the 1970s, “locking” has been on the spec list of every RJ45 connector ever made.  Other than when a plug has had its prong snapped off, I have never experienced an issue locking any RJ45 plug into any RJ45 jack.

It seems incredible to me that in my search for one particular product (a USB 3 to Gigabit Ethernet adapter) I uncovered three different, independent units in a row suffering from an identical flaw never before encountered—and not even a functional flaw, but a purely mechanical flaw, in a commodity component.  What are the odds?

In case you’re wondering whether my search ever succeeded, I eventually found this product (which turns out to widely available from many outlets, both domestic and foreign) offered by a Chinese jobber for the ridiculously low price of $6.24 and free shipping (it took ages, but it was free).  The guts (Realtek 8153) are precisely equivalent to all the other GigE adapters I found, but this one actually lets Ethernet cables lock in.

Ah, all the competitors who screwed up… for want of a nail.

Afterword (May 19): I’ve edited the link to the final dongle to point to what I believe is a similar, authentic dongle (which, you will notice, properly admits to being USB2.0, not 3.0) at another vendor. The dongles I received from China worked for a couple weeks, then went belly up. The square logo on the wide end, which says “GIGABIT” on authentic dongles, says “GLAABIT” on the dongles I received, leading me to believe they are cheap counterfeits. Given that it took over six weeks to receive these units to boot, I refuse to recommend the vendor any longer.

I finally got where I needed to be by trying cable after cable in my Monoprice dongle until I found one that would lock in… then left it plugged in and put everything back into my computer bag. A kludge solution, but ultimately effective.